In yesterday's post I discussed the first three of Andrew Christensen's "five principles" of a "Unified protocol for couple therapy". Today I'd like to talk about his fourth and fifth principles - foster productive communication (develop more adaptive communication skills) and emphasize strengths and encourage positive behavior. The five principles are illustrated in the following diagram (downloadable both as a PDF file and as a Powerpoint slide): 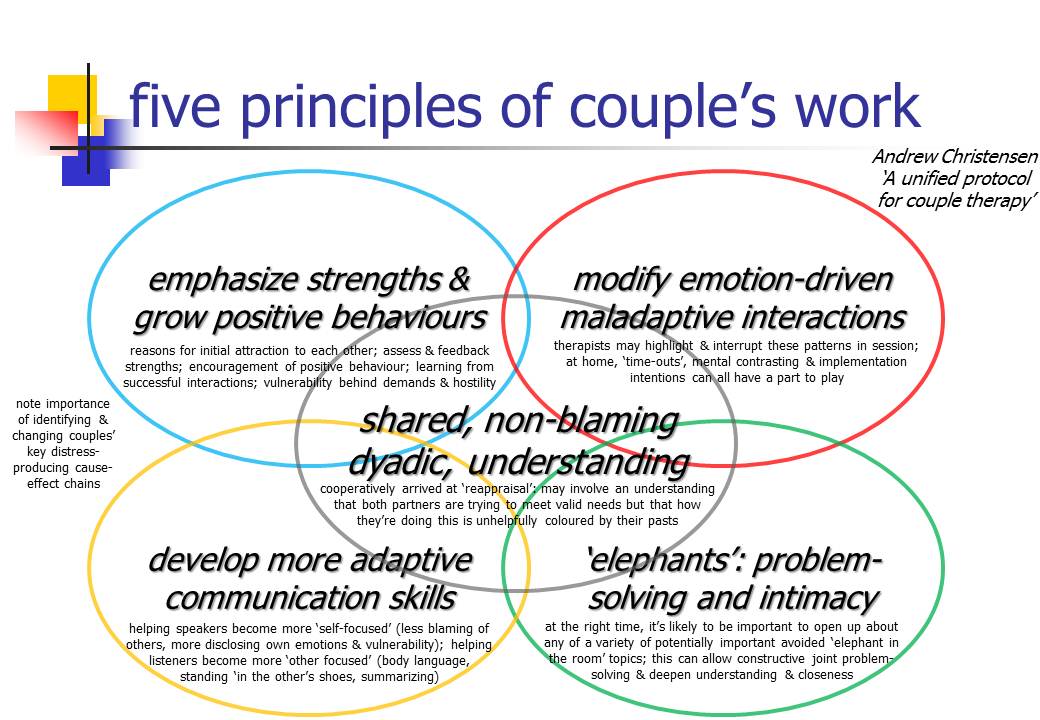 So Christensen's fourth principle is (4) foster productive communication.  The well-known couple researcher Don Baucom has commented that "good communication" is the single best predictor of long term relationship satisfaction, while Andrew Christensen writes "Perhaps the most common problem that couples complain about when coming to therapy is 'communication problems'.  All evidence-based couple therapies ... directly or indirectly address couple communication.  These efforts to foster productive communication go beyond the efforts to modify emotion-driven, destructive communication (principle 2) and beyond the elicitation of greater disclosure or private behavior (principle 3).  They typically focus on discussion of problems and address both expression skills (how partners express their concerns to the other) and listening skills (how partners listen to each other's concerns) ... what is common across therapies is an effort to change the speaker's message into one that is fuller, richer, and more emotionally revealing ... this emphasis on greater disclosure by the speaker is accompanied by a de-emphasis on communication about the partner ... Another common feature across therapies is an effort to enhance partner's ability to listen to each other.  Sometimes this is done directly, as in guidelines to summarize or reflect your partner's message before stating your own.  Other times, it is done indirectly as when a therapist shifts a speaker's message from a blaming one into a more vulnerable one that may be easier to hear.  Thus, across therapies there is an effort to help speakers become more 'self-focused' in their communication and help listeners become more 'other focused' in their listening."

And the last of Andrew Christensen's five principles is (5) emphasize strengths and encourage positive behavior.  Evidence-based couple therapies approach this area in a variety of ways.  There may be discussion of what attracted partners to each other in the first place.  Therapists often ask about, observe and feedback strengths the couple have.  Over the weeks of therapy, there may encouragement to note what goes well - either in building enjoyment & closeness, or in successfully managing difficulties.  There may well be deliberate exploration and planning to increase positive behaviours too.  There's good evidence that individuals, couples and groups all need a considerably higher amount of positive exchange than negative in order to thrive.  Some "negative", some challenge & conflict, is likely and may at times be constructive, but almost certainly these difficulties are best held in a much bigger container of caring, encouragement and enjoyment.

Christensen goes on to say "However critical the preceding five principles are for couple therapy, they must be applied in a particular order to particular problems in a particular way.  The details of these applications will likely determine the success of therapy for any specific couple.  As with the unified protocol for emotional disorders, I would suggest that a 'functional analysis of behavior' is the best conceptual basis from which to assess couples and from which to apply these principles ... (this) is simply an effort to identify the antecedent and consequent events that influence, control, or cause a target behavior.  As applied to couples, a functional analysis leads one to look at each partner's behavior as the important antecedent and consequent for the other's behavior.  For example, in looking at one partner's complaint that the other is withdrawn, one might notice that the partner's accusations serve as a trigger for the other's withdrawal, which then serves as a trigger for the initial partner's further accusations."  The author also notes "A functional analysis need not be limited to the immediate ... antecedent and consequent events.  It can also target more historical events, such as past experiences, or distal factors, such as cultural expectations ... given the complex nature of the task, an adequate functional analysis will likely be incomplete after the initial assessment, and therapists should always be open to the possibiity that additional factors, not previously considered, are playing a major ... role in the couple's distress."

Christensens also comments on the possible value of self-help materials - books, DVD's, computer programmes, and so on.  He closes his interesting chapter by highlighting that the proliferation of somewhat didactic treatment manuals covering the different evidence-based approaches to couple therapy throws up several problems: "However the manuals are quite complex, learning them can require considerable training ... possibly with certification ... however these efforts go far beyond the science - there is little information about what components of the package are scientifically justified.  In contrast, a focus on principles of change facilitates training and dissemination, making more time available for the application of each principle to the idiosyncracies of the individual case.  It keeps the clinical focus, as well as the research attention, on what is fundamental about the treatment."