Today was huge.  I woke early, cold.  It had been such a clear, starlit night.  My socks, that I'd washed through in the stream and tried to dry a bit yesterday, had frozen solid.  So too my walking boots with hard frozen laces.  Rub and mould the socks till I can get them onto my feet, and back into the sleeping bag to warm them a bit. 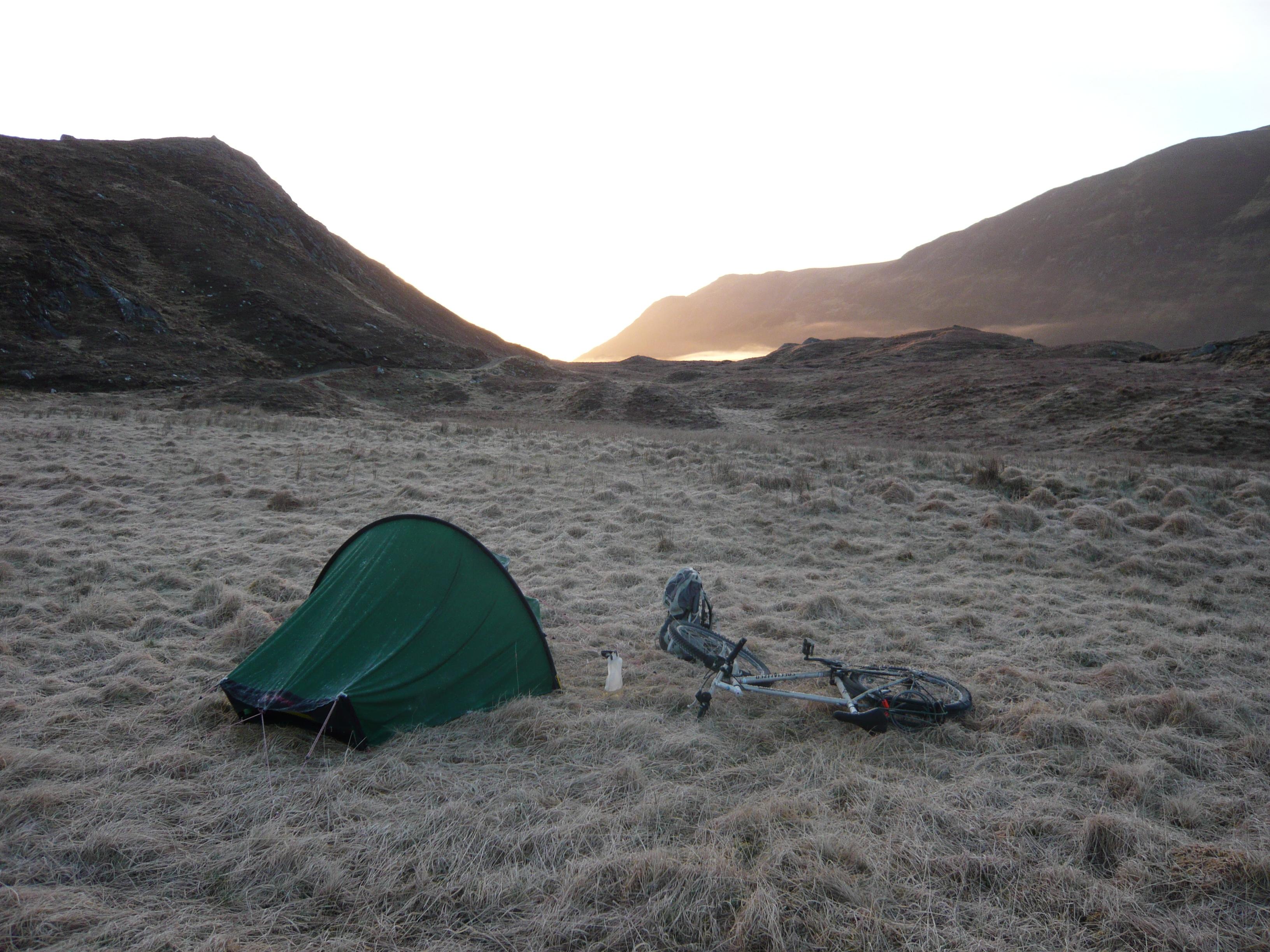 Then out into the cold, onto the mountain bike and cycle east with my pack to see if I can get to the start of today's walk up Coire Leachavie to the col below Mam Sodhail (hill of the barns).  Climb Sodhail and then down the other side to the horseshoe ridge above Gleann nam Fiadh before climbing up Carn Eige (file hill).  As my Scottish Mountaineering Club Munro guide tells me - these twin mountains are "almost identical in height and appearance" and are the highest peaks north of the Great Glen.  And then north from Carn Eighe along an undulating ridge out to the isolated Beinn Fhionnlaidh (Finlay's hill) with its view down into Loch Mullardoch and out to a great swathe of hills even further north.  Then the traverse back to the original col I climbed south west of Mam Sodhail and back down Coire Leachavie.  A pretty big day's walk.  It was made a bit longer because I came to a widish stream as I biked in.  I could cross it fairly easily picking my way over boulders, keeping balance with my walking poles.  I felt it was an unnecessary risk to try crossing carrying a mountain bike with only one hand free for a walking pole.  Too cold, too isolated, and too early in the day to get soaked.  So I semi-concealed the bike and immobilised it with the thick metal wire I carry with me for just such occasions.  Anybody wanting to take it would be faced with the headache of having to carry the bike for miles on their shoulders.  For such effort, they would almost deserve to have it! 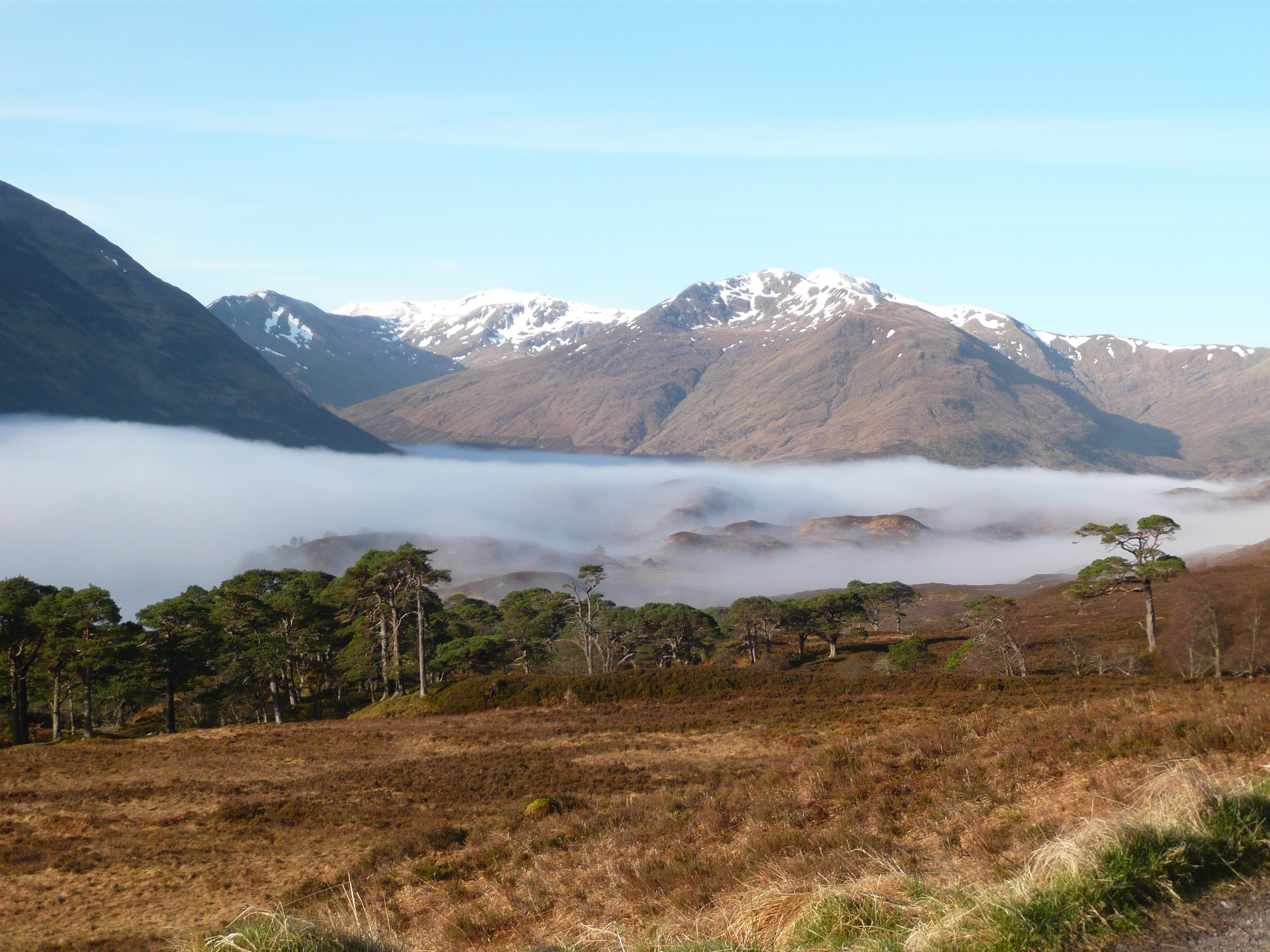 Well the day went beautifully and to plan.  All morning it was clear, clear with huge views.  The wind tugged and threatened at times.  Into the afternoon, clouds started to sail over the sky.  I remembered the prediction.  The Met Office mountain forecast had read "The rain persistent and heavy later ... , with abundant hill fog forming.  Strong southerly winds will increase gale force, with severe gales later in the west with gusts 70mph."  Don't try walking in a 70mph wind on hilltops - it's bloody awful.  The Met Office went on to say that the gales, rain and fog would move eastwards later tomorrow " ... with winds abating slightly."  I met just one other walker today.  He was moving fast coming back off Beinn Fhionnlaidh as I walked north.  I checked the forecast with him - mine was taken off the internet on Monday morning (I could get no mobile contact in Glen Affric).  He suggested that the picture was roughly as I stated, but that the weather would worsen overnight rather than in the afternoon and evening.  I'd made good progress and so decided to get back to camp, pack up and cycle out in the evening rather than wait for the predicted lashing gale the next morning.  Hard work.  A long day in the hills, then packing up camp and cycling out for well over an hour over quite rough track on a heavily laden bicycle.  Worth it though it seemed.  I reached the car and drove to a hostel a few miles out of the glen.  At least I would stay dry overnight even if I got blown and soaked tomorrow.

That's what happened.  A big long day.  Hours to savour, struggle, think, be aware, watch, feel.  And this is a blog on "Stress, health & wellbeing", so of all the details I could give about the day I'll start writing a bit more about risk & anxiety, about depression, rumination & creativity, and about mindfulness & other states of consciousness.

So briefly something on risk and anxiety.  I'm lucky.  I tend not to suffer much with anxiety.  Trips like this can help me to understand better what many of my clients struggle with.  Cognitive therapists tend to view anxiety as containing - somewhere at its heart - a perceived threat.  So throughout this trip there is the perceived threat of hurting myself on the hill and not being found till too late.  Considering whether to cross the stream this morning carrying my mountain bike, there was the threat of getting soaked, very cold and possibly physically hurt too.  Later in the morning, the final climb up to the col south west of Mam Sodhail involved moving over a steeply angled snow field with the threat of falling.

What have I learned through these and similar experiences that is relevant to stress & wellbeing?  I guess the first - and quite tricky issue - is whether one should tackle the particular anxiety-provoking action in the first place.  This is a big subject.  How much risk is one prepared to tolerate or embrace in one's life?  How realistic and significant is the particular risk one is thinking of taking?  What are the risks of not taking a risk and living too safely?  I've written about this before - when I went camping and walking a year ago.  As the psychotherapist Emmy Gut wrote in her ground-breaking book "Productive & unproductive depression" - "in the wilderness in which the human race developed its current genetic characteristics, individuals who had the capacity to respond to dangerous or otherwise significant circumstances with an adequate set of emotions, and acted accordingly, had a better chance to survive, to have children, and to raise them than individuals who were deficient in that respect".  At the top of the page listing handouts I've written on Emotions & Feelings, "Emotions are like a radar system" and "Emotions, arriving & leaving" build on this idea of distinguishing between adaptive and maladaptive emotionals responses.  Assuming one decides it "makes sense" to take a particular risk, how does one act & direct one's attention as one goes through with the risk?  I'm sure there are many answers to this question.  What I've found personally is that when taking a physical risk in the hills - particularly one that involves a possible fall - I quite deliberately keep refocusing on the practical small details of what I need to do next.  So crossing the steep snowfield up to the col, I concentrated (during the more difficult bits) on keeping three points of contact in the snow while moving the fourth - one at a time of two feet & two spiked walking poles.  Maintain traction with three, move the fourth.  If I'm moving a foot, kick in, saw into the snow.  Get a decent foothold.  Then concentrate on the next step, the next move.

I only have an average head for heights.  When I'm nervous of falling, I tend not to look down.  I usually don't look up often either to see how much further I have to go.  Just concentrate on staying safe this step; making this step a good one.  Is this mindfulness?  Is this flow?  I don't think it's really well described by either term for me.  This morning I had a good deal of tension and concern as I made the traverse of the snow.  Probably if I'd been more experienced, it would have been a flow activity.  I find it helpful bearing in mind the notion of flow as a middle channel leading up between anxiety and boredom.  For me the challenge was too daunting to relax easily into flow.  I didn't really see it as mindfulness either.  Yes I was "in the present moment", but with deliberate concentration, knowing that I would probably increase my chance of falling if I looked down at how far I would tumble.  Knowing too that looking ahead to see how much further I had to go, would also probably only introduce unhelpful thoughts and images into my mind.  Just concentrate.  Not so vastly different from someone with exam anxiety concentrating on their revision or on writing the exam rather than getting swept away by the concern of failing and all that might involve ... or someone with travel phobia taking the car or aeroplane and taking the journey step by step despite their mind tugging them into imagined catastrophes ... or many other examples of facing perceived threat.  Decide rationally whether it makes sense to go ahead to face the threat, to face the anxiety.  If you've decided it does make sense, then concentrate - step by step - go through with what it takes.  Be present.  Be task focussed rather than self focussed.  Slipping too much into fantasies about catastrophes & disasters, or worry about how much longer it's going to take - almost certainly not helpful.  I think mindfulness or other meditation training may be helpful here, but in training our ability to shift our attention deliberately - more a question of attention training or concentration training than mindfulness training.  The bus driver metaphor looks at similar territory to all this.

Enough for now.  I'll talk more about depression, rumination & creativity, and more about mindfulness & other states of consciousness in the next few posts.