"Keep on sowing your seed, for you never know which will grow - perhaps it all will."     Einstein

Our kindness (and unkindness) ripples outwards.  A group of people - or a broader society - survives because its members manage to act cooperatively.  There are a series of mechanisms that help maintain healthy groups despite a tendency for members to act selfishly sometimes in ways that can be "antisocial" - see for example Sherratt & Wilkinson's recent book chapter "Cooperation and sociality".  One particularly interesting mechanism involves the "infectiousness" of behaviour.  We can be inspired or dispirited by the actions of others - and we too can inspire or dispirit those we interact with.  Even more interestingly behaviours reach out not only to those directly affected, but also to at least another two degrees of separation.  If you are kind to me, I am significantly more likely to be kind to others, and those others (who you may never meet) are significantly more likely to be kind in their interactions, and then those others too pass on the good in turn.  Unfortunately the same is true for unkindness.

These findings are reported in Fowler & Christakis's 2010 paper "Cooperative behavior cascades in social networks" (following this hyperlink gives you full text access to this fascinating article).  Their research involved analysing individuals' behaviours across a series of six "public goods" money games.  The games involved groups of four people where each individual in the foursome had the opportunity to act selfishly or in a way that would benefit the other three players (at a cost to themselves).  The players in all groups then changed to new games with fellow group members who they hadn't played with before.  Again people had the option of acting selfishly or for the "public good".  Then players were shuffled once more and joined fresh groups, and so on.  See the full text article link above to get more detail about this.  What the diagram below illustrates is that if you're generous and act for the "public good", everyone who was in that particular game with you will be significantly more likely to be generous in the next game that they're involved in.  This tendency for them to be touched by your kindness persists for all further five games that your initial fellow group members play. 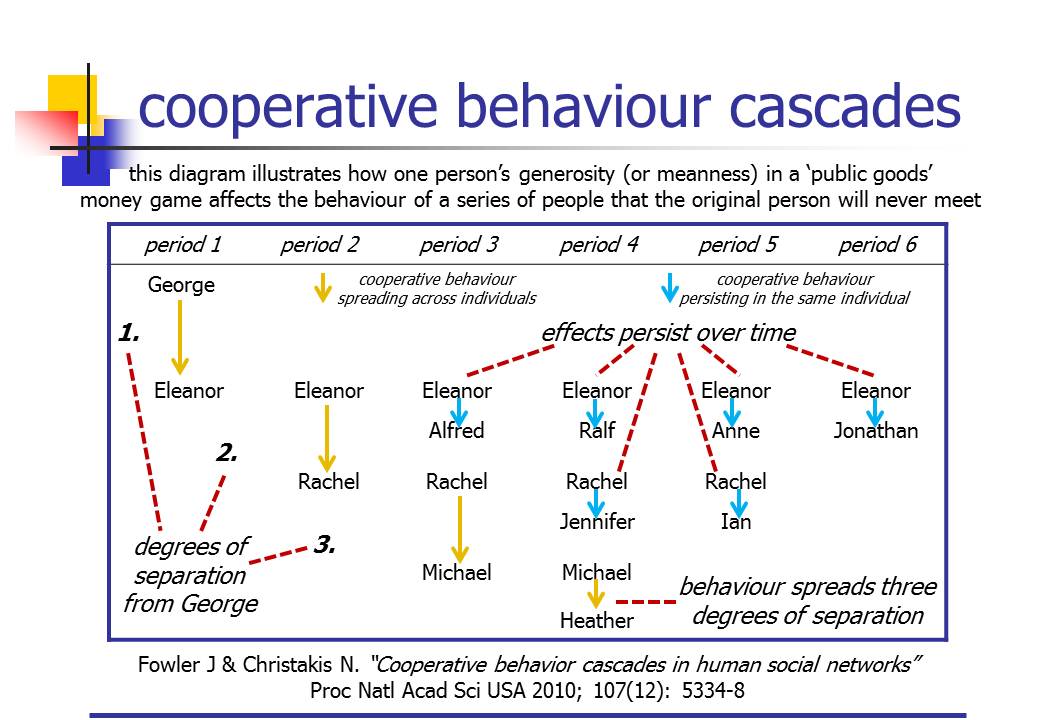 Even more fascinatingly their kindness continues to ripple outwards - so in the diagram above if George is generous in the game played at period 1, then Eleanor who was in this first game with him is significantly more likely to be generous in the next game she's involved in in period 2.  Now Rachel who has experienced Eleanor's kindness is more likely to be kind in the next game she participates in in period 3.  Then the same is true for Michael, touched by Rachel's generosity, when he is involved with Heather in period 4.  Kindness ripples out to three degrees of separation (as too does unkindness).  In this set of studies, a money unit generously contributed by George in period 1 leads to a total of three more money units being contributed to the "public good" (over the next five games) by people, who George affected directly and at up to three degrees of separation, than would have occurred without his original generosity.  It seems the most likely explanation for this effect is that we are inspired or dispirited by other's behaviour.  If this occurs in a laboratory experiment with complete strangers in a set of limited artifical "games", how much more powerful it may be in the real world, experiencing the behaviour of friends, family, and colleagues with no limit on how far and for how long the effects can ripple out!

In tomorrow's post - "Be the change you want to see in the world" - I'll extend these comments on social network influences to show how important they are in so many aspects of our lives.