Recent psychedelic research: how do they work?

How do psychedelics work?  This is a complex topic

Carhart-Harris, R. L. (2019). "How do psychedelics work?" Current Opinion in Psychiatry 32(1): 16-21.  Purpose of review Psychedelics are reawakening interest from psychiatry, cognitive neuroscience and the general public with impressive outcomes in small-scale clinical trials, intriguing human brain imaging work and high-impact journalism. Recent findings This brief opinion piece offers a perspective on how psychedelics work in the brain that may help contextualize these developments. It attempts to link various scales of action, from the molecular (serotonin 2A receptor agonism) through to the anatomical and functional (heightened plasticity) and up to the dynamic (increased brain entropy), systems level (network disintegration and desegregation) and experiential. Summary It is proposed that psychedelics initiate a cascade of neurobiological changes that manifest at multiple scales and ultimately culminate in the relaxation of high-level beliefs. The purpose of psychedelic therapy is to harness the opportunity afforded by this belief-relaxation to achieve a healthy revision of pathological beliefs. 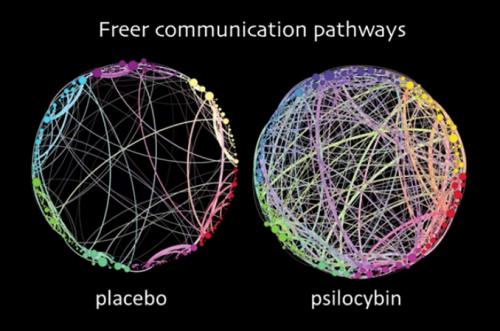 (imagery showing enhanced cross-communication in the brain from talk by Robin Carhart-Harris, TEDxWarwick 2016)

Olson, D. E. (2018). "Psychoplastogens: A promising class of plasticity-promoting neurotherapeutics" Journal of Experimental Neuroscience 12: 1179069518800508.  Neural plasticity—the ability to change and adapt in response to stimuli—is an essential aspect of healthy brain function and, in principle, can be harnessed to promote recovery from a wide variety of brain disorders. Many neuropsychiatric diseases including mood, anxiety, and substance use disorders arise from an inability to weaken and/or strengthen pathologic and beneficial circuits, respectively, ultimately leading to maladaptive behavioral responses. Thus, compounds capable of facilitating the structural and functional reorganization of neural circuits to produce positive behavioral effects have broad therapeutic potential. Several known drugs and experimental therapeutics have been shown to promote plasticity, but most rely on indirect mechanisms and are slow-acting. Here, I describe psychoplastogens—a relatively new class of fast-acting therapeutics, capable of rapidly promoting structural and functional neural plasticity. Psychoplastogenic compounds include psychedelics, ketamine, and several other recently discovered fast-acting antidepressants. Their use in psychiatry represents a paradigm shift in our approach to treating brain disorders as we focus less on rectifying “chemical imbalances” and place more emphasis on achieving selective modulation of neural circuits.

Haijen, E. C. H. M., et al. (2018). "Predicting responses to psychedelics: A prospective study"  Frontiers in Pharmacology 9(897).  (Available in free full text) Responses to psychedelics are notoriously difficult to predict, yet significant work is currently underway to assess their therapeutic potential and the level of interest in psychedelics among the general public appears to be increasing. We aimed to collect prospective data in order to improve our ability to predict acute- and longer-term responses to psychedelics. Individuals who planned to take a psychedelic through their own initiative participated in an online survey (www.psychedelicsurvey.com). Traits and variables relating to set, setting and the acute psychedelic experience were measured at five different time points before and after the experience. Principle component and regression methods were used to analyse the data. Sample sizes for the five time points included N= 654, N= 535, N= 379, N= 315, and N= 212 respectively. Psychological well-being was increased two weeks after a psychedelic experience and remained at this level after four weeks. This increase was larger for individuals who scored higher for a ‘mystical-type experience’, and smaller for those who scored higher for ‘challenging experience’. Having ‘clear intentions’ for the experience was conducive to mystical-type experiences. Having a positive ‘set’, as well as having the experience with intentions related to ‘recreation’, were both found to decrease the likelihood of having a challenging experience. The trait ‘absorption’ and higher drug doses promoted both mystical-type and challenging experiences. When comparing different types of variables, traits variables seemed to explain most variance in the change in well-being after a psychedelic experience. These results confirm the importance of extra-pharmacological factors in determining responses to a psychedelic. We view this study as an early step towards the development of empirical guidelines that can evolve and improve iteratively with the ultimate purpose of guiding crucial clinical decisions about whether, when, where and how to dose with a psychedelic, thus helping to reduce risks while maximising potential benefits in an evidence-based manner.

Carhart-Harris, R. L. and D. J. Nutt (2017). "Serotonin and brain function: a tale of two receptors"  J Psychopharmacol 31(9): 1091-1120.  Previous attempts to identify a unified theory of brain serotonin function have largely failed to achieve consensus. In this present synthesis, we integrate previous perspectives with new and older data to create a novel bipartite model centred on the view that serotonin neurotransmission enhances two distinct adaptive responses to adversity, mediated in large part by its two most prevalent and researched brain receptors: the 5-HT1A and 5-HT2A receptors. We propose that passive coping (i.e. tolerating a source of stress) is mediated by postsynaptic 5-HT1AR signalling and characterised by stress moderation. Conversely, we argue that active coping (i.e. actively addressing a source of stress) is mediated by 5-HT2AR signalling and characterised by enhanced plasticity (defined as capacity for change). We propose that 5-HT1AR-mediated stress moderation may be the brain's default response to adversity but that an improved ability to change one's situation and/or relationship to it via 5-HT2AR-mediated plasticity may also be important - and increasingly so as the level of adversity reaches a critical point. We propose that the 5-HT1AR pathway is enhanced by conventional 5-HT reuptake blocking antidepressants such as the selective serotonin reuptake inhibitors (SSRIs), whereas the 5-HT2AR pathway is enhanced by 5-HT2AR-agonist psychedelics. This bipartite model purports to explain how different drugs (SSRIs and psychedelics) that modulate the serotonergic system in different ways, can achieve complementary adaptive and potentially therapeutic outcomes.

Carhart-Harris, R. L., et al. (2014). "The entropic brain: a theory of conscious states informed by neuroimaging research with psychedelic drugs" Front Hum Neurosci 8: 20.  Entropy is a dimensionless quantity that is used for measuring uncertainty about the state of a system but it can also imply physical qualities, where high entropy is synonymous with high disorder. Entropy is applied here in the context of states of consciousness and their associated neurodynamics, with a particular focus on the psychedelic state. The psychedelic state is considered an exemplar of a primitive or primary state of consciousness that preceded the development of modern, adult, human, normal waking consciousness. Based on neuroimaging data with psilocybin, a classic psychedelic drug, it is argued that the defining feature of "primary states" is elevated entropy in certain aspects of brain function, such as the repertoire of functional connectivity motifs that form and fragment across time. Indeed, since there is a greater repertoire of connectivity motifs in the psychedelic state than in normal waking consciousness, this implies that primary states may exhibit "criticality," i.e., the property of being poised at a "critical" point in a transition zone between order and disorder where certain phenomena such as power-law scaling appear. Moreover, if primary states are critical, then this suggests that entropy is suppressed in normal waking consciousness, meaning that the brain operates just below criticality. It is argued that this entropy suppression furnishes normal waking consciousness with a constrained quality and associated metacognitive functions, including reality-testing and self-awareness. It is also proposed that entry into primary states depends on a collapse of the normally highly organized activity within the default-mode network (DMN) and a decoupling between the DMN and the medial temporal lobes (which are normally significantly coupled). These hypotheses can be tested by examining brain activity and associated cognition in other candidate primary states such as rapid eye movement (REM) sleep and early psychosis and comparing these with non-primary states such as normal waking consciousness and the anaesthetized state.