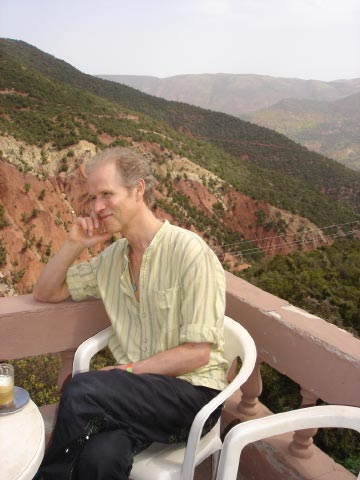 Here in the civilisation of Hotel Irocha, I woke early and then got up with the first tentative muezzin call from the local village.  It's now a bit before 5.00am.  I've been settled typing for a little and the calls become more demanding.  As on the first morning in Marrakech nearly a week ago, the muezzin call starts a cock crowing.  It's still pitch black.  The desert sunrise yesterday morning wasn't till well after 6.00am.

Another extraordinary day yesterday.  In our attempts to come up to the ebullient standard of our guides' singing on our last desert evening, we had tried a couple of Bob Marley songs - "One love" and "Three little birds"  - without much success.  Now once the two 4x4's had collected us, our driver put a tape into the Toyota's player and out came the voice of Mr Marley himself.  Within moments all four of us desert travellers in the 4x4 were in full, clapping voice.  The driver grinned hugely and turned up the volume - party celebration.  Not quite the meditative space we'd spent a good deal of time with in the desert, but joyous, great!  And later, meeting up with the other 4x4, back came Bob on the tape player and we danced on the dunes in the morning sun.

Initially 2 to 3 hours on rough unsurfaced tracks before meeting up with the main road system.  We then stopped for mint tea at a little roadside cafe, and on again via a lovely village carpet "warehouse" run by a women's cooperative and presided over by a smiling, amazingly-faced local Berber woman in her 80's.  Finally after another 3 hours or so's driving we arrived here at Hotel Irocha.  Some of us knew it from our trip 2 years ago.  It's a special place - particularly so because they have hot water and showers.  A first proper wash for 5 days.  Shaving.  Washing hair.  Something a bit ritualistic about this dropping the desert sand.

A cold beer later, we sat - the 8 of us - for a supper of delicious soup, then vegetables and rice (some of us also ate meat), and finally crème caramel.  Gosh.  Change.  We took turns to speak about intentions we had now for when we got home.  For some people their major intentions were about relationships.  They said that what we had shared on this trip together was so precious, close, fun - not something that they had in their relationships enough back at home.  Two people talked of wanting to develop this kind of close friendship more from the less deep acquaintanceships they currently had around where they lived in the UK.  A couple of others mentioned how good the walking had been physically, and that they wanted to continue to walk more once back in everyday life.  Others talked of organizing their lives differently.

I spoke of two intentions.  One is about experimenting with sleeping a bit longer.  Maybe I sometimes push myself a bit too hard at home.  I notice that here in Morocco, I'm thinking more clearly.  It seems that when I'm a bit too tired and maybe too much is going on - too much on my shoulders - I start to forget things a little, muddle words occasionally.  That's stopped happening after these days in the desert.  Obviously this is for a whole series of reasons.  So many fewer responsibilities is very likely part of it.  There's something startlingly simple about just walking silently, not even having to be concerned about route finding - just following the beautiful swaying walk of the camels.  But I have also been getting more sleep.  There's no electric light.  We lived more with the natural rhythms of day and night.  My resting pulse rate dropped by approximately ten or so beats a minute too.  That's likely to be good - for example, slower heart rate was associated with reduced heart attack risk in a recent large study in older women (but a good understanding of statistics suggests the absolute increased risk is only slight). Earlier research has shown the negative health associations of higher resting heart rates in men too.  I exercise regularly at home, so I don't think this drop in autonomic tone is about increased fitness.  So one intention is to get 15 minutes or so's more sleep at night.

The second intention is more obviously meditative in tone.  I've talked about Antonio Damasio's work.  In his fascinating book "The feeling of what happens: body, emotion and the making of consciousness", he proposes a  model of consciousness and sense of self based on much research as well as observational data from testing unfortunate individuals suffering from a variety of local identified brain damage (strokes, tumours and so on).  Damasio talks of the primitive brain stem structures that monitor and regulate  crucially important aspects of body state such as oxygen levels, temperature and acidity/alkalinity.  In simpler organisms, such internal regulation is likely to be entirely reflex and automatic.  This parallels, for example, a sea anemone which opens and closes depending on whether it gauges the environment as safe or potentially threatening - but this assessment and self-regulation is entirely automatic with no sense of self involved.  Damasio argues that, over the course of evolutionary development, there came a point when some organisms evolved a mechanism that allowed them to note that internal changes in the body are happening to one's "self".  This basic sense of self is a flowing present.  It changes from moment to moment.  It is the "feeling of what happens" of the book title.  Awareness meditation's focus on passing changes in body, sensory input, emotion and thought links directly to this "basic self".

I've meditated, in some form or another, most days of the week for nearly 40 years.  A while ago I became interested in what it would be like not to meditate.  I managed for some weeks before restarting.  My strongest sense when not meditating regularly was of "being locked out of my house".  In some subtle - and it felt crucially important way - I began to lose a sense of being connected with myself.  Maybe a weakening of a link to this basic self.  Damasio argued that body feelings and emotions are right down at the foundation of our sense of self.  Sitting on the basic self is the more recent extended, autobiographical self with its whole paraphernalia of memories, plans, ideas and so on.  Walking silently in the desert, day after day, re-linked me to my basic self ... finding myself again ... coming to my senses.  So the second intention is to use simple connection to my body-sense and other senses more.  There are many ways of quietening the mind.  Forms of concentration help reduce the wandering of the mind - see, for example, the Powerpoint miniatures "Attention & mind-wandering".  My impression is that a basic kinaesthetic focus can be particularly deep for me, and the intention is to experiment with this more fully - in walking and sitting meditations and in dance.

I'm reminded again of the beautiful Mary Oliver poem "Wild geese" - "You do not have to be good.  You do not have to walk on your knees for a hundred miles through the desert, repenting.  You only have to let the soft animal of your body love what it loves."

Our desert guide two years ago said to us "Le desert lave l'ame comme l'eau lave le corps".  Catero, my wife, had picked up whitened fragments of wood during our last day in the desert.  She'd written this saying on each piece of wood and now gave one to each of us "pilgrims".