Would you like to be 14 years younger – it’s largely a matter of choice!

Back in January I wrote a blog post entitle "Does a healthy lifestyle really make a difference? "   I highlighted that it makes a hell of a lot of a difference.  At around that time another major study was published that hammered this point home even more thoroughly and I've been meaning to mention it in a post ever since.  The recent publicity on poor fruit and veg intake in the UK population triggered me into looking the earlier study out.

The Cambridge team who did the research (Khaw, Wareham et al. 2008) wrote: Background: There is overwhelming evidence that behavioural factors influence health, but their combined impact on the general population is less well documented. We aimed to quantify the potential combined impact of four health behaviours on mortality in men and women living in the general community. Methods and Findings: We examined the prospective relationship between lifestyle and mortality in a prospective population study of 20,244 men and women aged 45-79 y with no known cardiovascular disease or cancer at baseline survey in 1993-1997, living in the general community in the United Kingdom, and followed up to 2006. Participants scored one point for each health behaviour: current non-smoking, not physically inactive, moderate alcohol intake (1-14 units a week) and plasma vitamin C>50 mmol/l indicating fruit and vegetable intake of at least five servings a day, for a total score ranging from zero to four. After an average 11 y follow-up, the age-, sex-, body mass-, and social class-adjusted relative risks (95% confidence intervals) for all-cause mortality(1,987 deaths) for men and women who had three, two, one, and zero compared to four health behaviours were respectively, 1.39 (1.21-1.60), 1.95 (1.70-2.25), 2.52 (2.13-3.00), and 4.04 (2.95-5.54) p<0.001 trend. The relationships were consistent in subgroups stratified by sex, age, body mass index, and social class, and after excluding deaths within 2 y. The trends were strongest for cardiovascular causes. The mortality risk for those with four compared to zero health behaviours was equivalent to being 14 y younger in chronological age. Conclusions: Four health behaviours combined predict a 4-fold difference in total mortality in men and women, with an estimated impact equivalent to 14 y in chronological age.

Hence the title of this blog - "Would you like to be 14 years younger ... "  For many of us that's a choice we still have.  The choice won't stay there indefinitely. 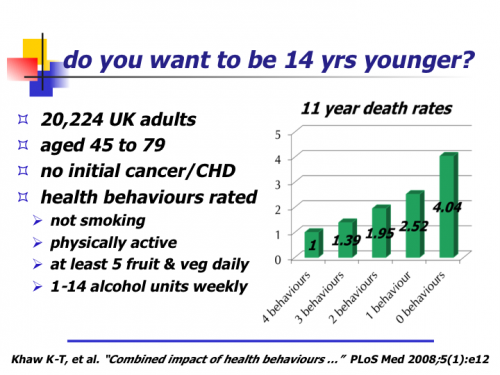